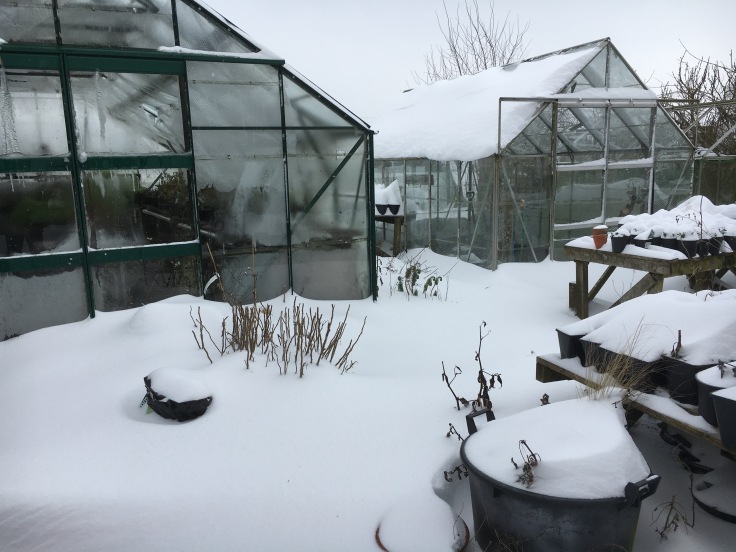 2018 has not been an easy gardening year so far ! The winter took it’s toll, more snow than the garden has had to deal with since we moved in and a greyness that descended and stayed for a very long time. Early seeds shivered in their trays and never germinated or braved the elements and damped off … and yes, I do have a tendency to sow too early, it’s the need to be in  the garden after a long winter … and every year I vow I won’t order so many seeds and every year the packet count increases…

Despite all the negatives the greenhouse was before long bursting at it’s glass seams .Then came the problems attached to hardening plants off and potting them on ! The weather was simply too cold at night to risk moving many … many meters of fleece came to the rescue !

Several mature shrubs suffered under the weight of snow in the unkind winter and split, they have been cut back and some are very reluctant to show signs of recovery, cold ,wet soil has taken it’s perennial  victims and most plants  have been slow to show much enthusiasm. I too have been slow to get motivated !!!

Bunny wars are once again a feature of my gardening diary … one sweet little bunny appeared to be causing huge amounts of damage both to my potted plants and garden, delaying any planting out – a friend did point out that it could be ‘several sweet bunnies’ as they do all look the same … and in trying to keep him / them out I think we have trapped it/them in  the garden … A day spent lifting all my nursery plants off the ground and using anything we could find to make temporary tables – was successful in decreasing pot damage but increased casualties in the garden. I was reluctant to plant anything , knowing Bunjamin would think it a new addition to his Herefordshire smorgesbord  …. I wish him/them no harm I just want them out of my garden … he isn’t impressed by my humane traps with tempting morsels  – why would he be when there is so much on offer in the garden ? He could have such a nice holiday somewhere …. anywhere away from Church Cottage…

I have been very fortunate to be offered the chance to sell my plants at a wonderful tea room and art studio near Ledbury –  Trumpet Corner Tearoom . They serve delicious homemade food made with locally sourced ingredients in a delightful setting . The Tearoom Gallery is host to a number of very talented local artists, craftsmen and women and runs a varied programme of  creative workshops .  So rabbit attacks in my nursery are not very welcome !!!

The garden opens for the NGS this month and I am worried about what will actually be  of interest, or left … I do think this every year but this year my worries are more serious ! Will just have to ply people with tea and cake …. We made over £1000 for the charity last year so would really like to be able to match that again ! I know that if we opened at a weekend we would have a lot more visitors but access and parking make that impossible ! Must admit I think it must be a pleasanter experience for people sitting in the garden not to have to share it with too many others … It also gives me more time to talk to my visitors, sell my plants and answer their many questions !

Many people who visit Church cottage  don’t really know what the NGS actually does … Last year they donated £3 million to a range of charities including Macmillan Cancer Support, Marie Curie, Hospice UK and Parkinson’s UK. I have lost three of my closest friends to cancer, both my parents had Bowel Cancer, in the last three years a dear friend began the battle and is still fighting it and five friends and family members  have been treated and recovered from breast, bowel  and prostrate cancer. There can be very few families who have not been affected by this greedy disease. It’s what inspired me to open my garden..

The garden, as always, has repaid me for it’s care and it’s actually looking quite good ! 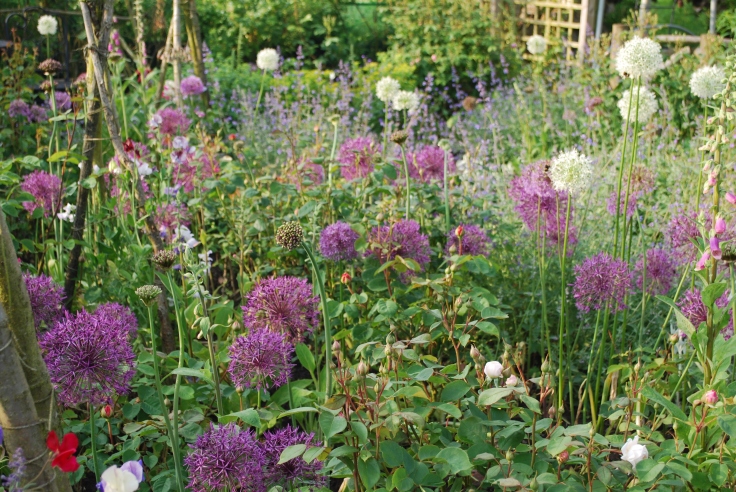 can turn into this … 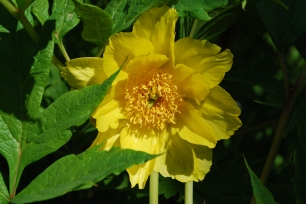